Global Game Jam 2018
Tue 6th February 2018
The Oslo Jam siteLet stream!FridaySaturdayWrap it up
Like in 2015 and 2016, I spent the last weekend of January at the Global Game Jam.


For this 10th anniversary of the event the theme was: Transmission 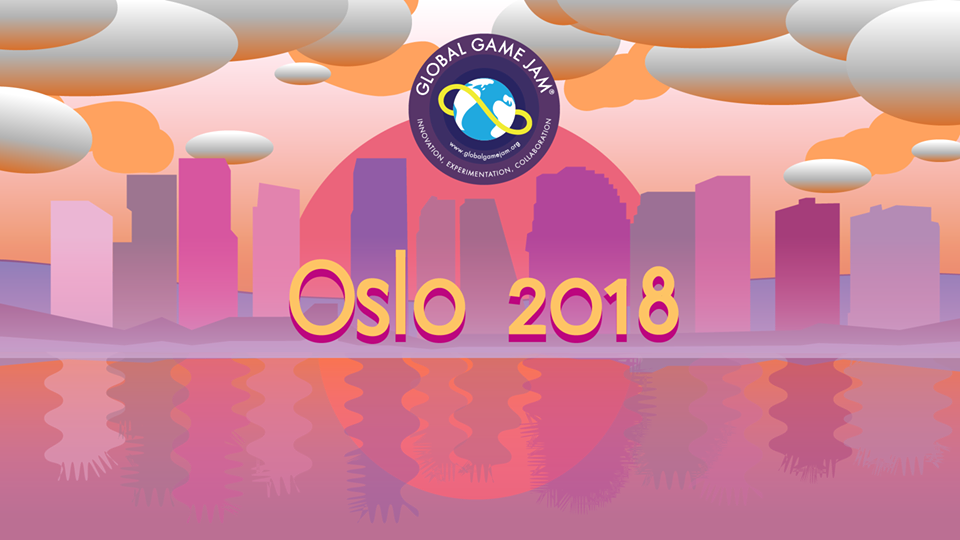 GGJ 2018 - Oslo logo
Like last year I started from the code base I used for the previous game jams, and as usual I only kept a small kernel of functionalities1.

My idea for this year was to make a game where the player would have to transmit messages using morse code, with just one single button being pressed more or less longer to generate the right signals.

The original pitch was to have something like a small Game & Watch LCD game, with small characters transmitting data along telegraph poles, or creating smoke signals to pass over impassable chasm.

After a good night sleep, I realized that the idea would be difficult to present nicely in less than 48 hours, so I thought of doing a kind of "Telegraph Hero" game.

The event was still hosted by the Westerdals Oslo School of Art, Communication & Technology, but the organization was slightly different from the previous year, mostly because the school had moved out of the Oslo Buss Terminal gallery to somewhere else close by.

The obvious improvement is that this time we did not have to use some access card to open and close doors each time we needed to make a pause!

Some of the people I had met on the previous years were there2, as well as some current and former colleagues.

This year was no exception: Most games were written using the Unity engine.

Unfortunately my game never got released because of a combination of events, including being sick, trying to stream the event, as well as coordination/planning management problems.

In the few weeks before the event, a number of people have told me I should totally do some youtube videos explaining old stuff, like how old console games worked, how to make demos and games on the Oric and Atari, etc...

From experience, I know that without an actual person talking, these videos tend to be very boring, but as a French speaker, I'm often being picked on with annoying 'Allo Allo' references3, so I did not really feel confident in doing that.

Anyway, I decided to give a shot by doing something unusual (for me):

Live streaming the creation of an Oric game during the game jam
That was a good idea from a learning experience point of view, but that was definitely a terrible idea from a productivity point of view, because you can't really stream without commenting what you are doing.

It's probably fine for artists, because things are very visual, but with code things are much more abstract and comparatively require a lot more background context to even understand what happens in front of your eyes.

Add to that the fact that I had came up with a design change during the friday night, and I needed to communicate that to the artist who decided to give a shot at making me graphics for the game, adding a new layer of interaction of time spending I did not normally have to deal with on these projects.

So I ended up just talking, and showing stuff.

I showed the OSDK website, how I was building and compiling from Sublime Text, the fact it was normally a Windows program but that it worked ok-ish enough on Linux, etc...

Ultimately, the only piece of code I wrote is a simple ASCII to Morse code converter.

Yeah! That's productivity for you!

Nothing really exciting happened on Friday, I mostly kept the system running to make sure it would work fine the next day.

A large part of the evening was spent setting up the hardware, go to the presentation for the unveiling of the theme, and then discussing and brainstorming with other people to find which game to do.

That one is a long one, about 6 hours long, but I'm not always in front of the screen because I had to attend some presentations, discuss with some people, etc...

At the end of Saturday evening I gave up, with some stomach pain and a growing headache.

So, was it a good game jam? Well, I miserably failed. On the other hand, now I know how streaming works, so who knows, I may do that again at some point, but with some shorter and more focused videos, like maybe 30 minutes long?

Don't hesitate to give me some feedback regarding this idea: If there's any topic you'd like to see treated in-depth, just tell.

1. Most of it being the FloppyBuilder and OSDK core systems↩
2. Hi Sky, Dillinger, Tord, Tryggr, Martin, ...↩
3. As well as people asking me to pronounce "hamburger"↩
comments powered by Disqus