There are not many demo parties in the USA, and even less of these showing Oric demos running on the actual Oric hardware specially with a Cumulus device!

For some reason I can't fathom, it appears that Buggy Boy is the host's favorite Oric demo, so it's the one they decided to show.

You can watch the 9 hour long video on the Scene Sat archives (the Oric part starts at 1:30).

I did enjoy seeing my demo on the big screen, but it kind of hurt to hear the (well deserved) "World Slowest Fractals" (or was it second slowest?) comment, as well as seeing the final slowwwwwwww scroll.

The thing is, there's no real reason why these parts are slow, other than the fact that I finished the demo on the party place with a huge deficit of sleep.

For sure, the most annoying elements in the demo as it stands now are the following:
If I can improve on these problems, I can totally see myself release a version 1.1 of the demo with all these annoying things fixed.

Since the previous article was about profiling, let's dig in the code and see if we can improve things.

If you want to know more about the demo, please refer to the Defence-Force Buggy Boy demo page, it has screenshots, videos, and links to the complete source code1.

This article is not going to tackle all of these issues, we are only going to concentrate on one element at a time, and see how we can approach it in a professional and rigorous way!

One of the first things to do is to isolate elements to make the iteration loop as fast as possible, and also to eliminate anything that can impact the performance (a good example would be the music player, or heavy duty interrupt driven code running in the background).

An easy way to do that, is to modify "main.c" to directly jump to the right location after the initialization are done:
At this point, when launching the demo we arrive directly on the end scroller:


As you can see, it is slow, taking about 2 minutes from start to finish.

So, how does this code work?

I'm not particularly proud of the code, but it's about all I came up with at the time.

If you look at the screen, you'll see that the scroll is not centered:

There is more "black" at the bottom than usual!

The reason is that I reused the text routine used during the fractal to display each line of text, it's hidden behind black ink attributes so it is invisible until the scrolling routine makes it appear.

Obviously the routine has to make sure it does not scroll up the black ink attributes else it will scroll with the text itself.
The text of the scroller is just defined as a simple array:
Just from observing the scroll we can see that there are no particular additional slowdowns when new texts are generated, so we can probably exclude the _Mandel_DisplayGreetings routine from the list of suspects:

It may happen to be taking some time, but in regard to how slow the scrolling is, this one is not our priority at the moment.

Which brings us to _FxTitle_Scroll:
Just by the length of the routine, we know that it's not going to be a fast one: It's basically two simple loops using indirect addressing to copy one byte at a time from one pointed location to another one.

Generally the key to writing fast code on the 6502, at least when moving memory, is to unroll the code to avoid paying the code of comparing and looping.

Note that the code does not actually scroll the entire screen: It skips over the second column of the screen in order to preserve the black ink attributes used to hide the new text being introduced.

So the big questions is: How many cycles, how long does it take to run this block of code?

If you go to the OSDK documentation page regarding the instruction set you can learn things such as:


So basically you have all the information here, just a matter of summing all that:

soooo.... why not use Oricutron to just tell us the exact answer without melting a brain fuse?

The easiest way to do that is to just add a forever loop in the code just before the call to _FxTitle_Scroll:
Then recompile the code, run the program, and when you see the red square appear on the screen, press F2 to enter the debugger: 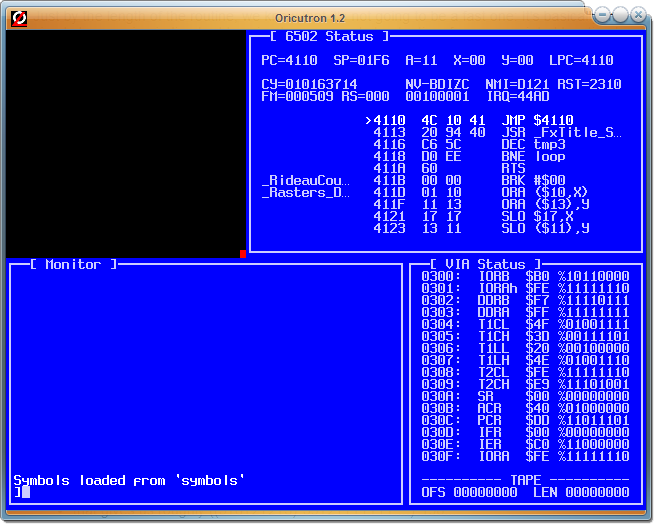 As you can see, the program is stuck on the JMP $4110 instruction.

Press F12 to skip the instruction, you should now be on the JSR _FxTitle_S... line.

At this point it may be a good idea to press F9 to reset the cycle counter (CY), and now all you need is to press F11 to have Oricutron run the entire function for you and automatically stop when it's back to the next instruction you have on screen, and you should see the following: 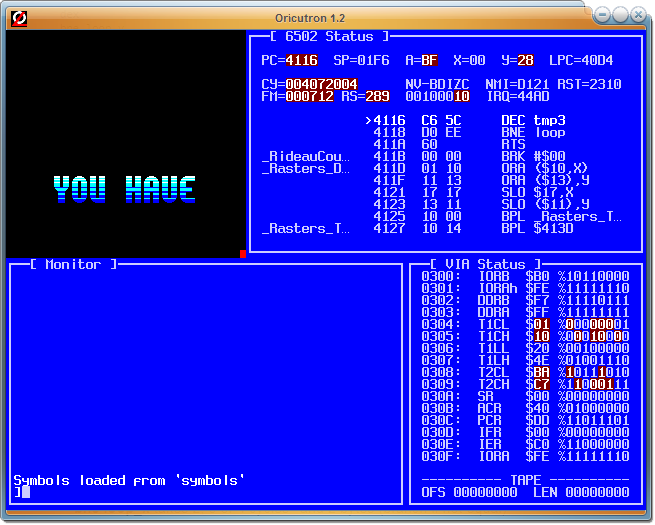 The cycle counter now displays 4072004 cycles, which is a huge amount, but as you can see on the screen, we also have the "YOU HAVE" text displayed, which means we did scroll the screen 28 times, so we need to divide to know the time spent on one frame.

With 7.2 frames, we are far from anything remotely acceptable.

And the 18 cycles per byte shows that there is a huge overhead, since the LDA+STA pair "only" took 11 cycles.

We can probably do better than that :)

How can we optimize this code efficiently?

As I said earlier, the easiest way to do fast code is to unroll the code, and in this particular case, the optimization is relatively obvious:

We just need to have code that can efficiently scroll up ONE column, and then just call it 39 times.

Since there are no increments and no loop, each of these copied byte takes a grand total of 9 cycles, which happens to be exactly half the amount of cycles per byte of the existing routine.

The drawback is obviously the room taken: Instead of the relatively compact original code, we now use 198*(3+3)=1188 bytes for the routine, plus one for the final RTS.

And obviously we need to be able to scroll more than one column, so we need 39 more like these, one for each column, which pushes the memory usage to 46332 bytes, which is a problem since we do not have this amount of available memory!

Well, let see if we can use X or Y indexed mode, what if we use that instead:
Now we can just set the value of X to anything between 0 and 39 and the routine will be able to scroll just this particular column. The drawback is obviously that now we have some increments and compare to do, but it is not as bad as in the original code because this is done on the OUTER LOOP instead of per byte, so we only need 39 of these instead of 39*198.

Clock wise, this solution is slightly worse, because the STA absolute,x takes 1 additional clock cycle, fortunately the LDA absolute,x takes the same amount of time, so we are using 10 cycles per byte, which is still much better than the 18 of the original routine.

Assuming we added this column routine to the source code and call it "FastColumnScroll", here is now our new scroll routine:
Here is the result:


As you can see, the scroller now runs in one minute instead of two, so about twice as fast as the original code.

An obvious issue with this type of optimization is that it makes the code much larger than it could be, which is specially handicapping in a single load demo where all the code and data is present in memory at the same time: If you apply this method everywhere, there's not much room for many effects.

But there is a solution: Generated code!

The beauty of assembler is that code and data is really some purely arbitrary distinctions, you can totally run data as code or display code as data, as long as you know what you are doing.

You can also generate code on the fly, or modify it.

In this particular case, we only need the fast vertical scroller at the end of the show, so why not just generate it when required?

From our earlier calculation we know that this code occupies 1189 bytes, and as it happens, we have plenty of tables that are only used for specific effects and will not be reused at this point in the demo, so why not use the area to store our code.

In table.s we have the following:
These tables are used in the previous screens, and the whole area is largerly sufficient to store our generated code, so we can just add one more label and be done with it:
and of course we need the code generator:
And that's it!

We just need to call this before we start the scroll, it will build the routine, and we can replace it by something else later if needed.

1. The demo should build as-is with the latest OSDK↩
2. 2 cycles for the base branch instruction, plus 1 if the branch is taken, plus 1 if doing so crosses a page boundary↩