Charsets
Thu 17th September 2015
If there is one thing that can make a game look like it was professionally produced, it's definitely using a different character set than the one provided by the system.

Let's take a look at some existing games to show what I mean. 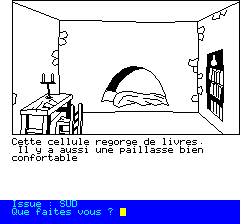 Athanor - System font
Nothing particularly wrong, it's a classic adventure game with a graphical view of the location on the top, and some descriptive text under it.

After some talks, the author agreed to use a different font, so I spent a bit of time to try to design a custom character set that would look more 'ancient'.

Here is the result:

Athanor - Custom font
It's definitely not as easy to read as the standard charset, but the point of a game is to forget normality for a while, so anything that helps the immersion will make the game feel better. 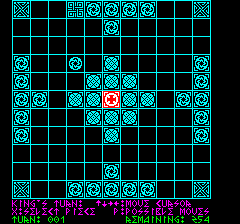 Defence Force
I hope these examples will have convinced you, if not, then please go take a look at The Hobbit1 or L'Aigle d'Or2, and try to imagine how much better they would look if they had a different font.

There's not much to know about the character sets to be able to play with them:

So, knowing that the base location is $B400 in TEXT and $9800 in HIRES, and that all you have to do is to poke around to modify the graphics, you see that it's indeed very easy to do.

The magic formula is:

Address of the character=base location+(ASCII code * 8)
A simple way would be to have the character set in your program, and then just read the values and poke them in the character set area, which is indeed what many BASIC programs are doing using a DATA section.

The main problem with that is that you are wasting a lot of memory: You don't need to keep the original data after it was transferred to the character set memory area!

The easiest way to solve the problem is to just load the charset in the area in question, and that's it!

So let's say we have this very basic font on the right with the 26 uppercase letters.

Simply by using this small set of commands you can convert a PNG picture to a TAP file that can be loaded directly at the right address in memory.
The first command uses PictConv3 to load the PNG file and convert it a headerless binary file (which could also be converted to a C or assembler source code).

The second command uses Header4 to add a TAP header specifying the load address to be $B608 (which is $B400+65*8, B400 being the base memory address, 65 the ASCII code of the letter A, and 8 the number of lines in a character).

For something as basic as using a fancy font, really that's all there is to know.

By the time you need that, you will not need to read these tutorials anymore, you will be already a true Oric Ninja Master :)