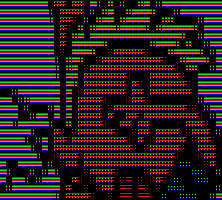 Released in 2000
“Despite the lack of sound, this is a nice demo. The movement and rotation is really good. The artificial creation of colours that the Oric does not have is interesting to see.”
Lothlin
“good colors, fantastic rotozoom for this old hardware!”
Zone
“Saw this live at the STNICCC, amazing stuff!”
CiH