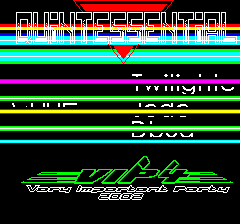 Released in 2002
“Another dose of great graphics, sounds and ideas. After some of the dreadful Oric software we have seen over the years, you just won't believe what you are seeing (and hearing) your Oric do when you load this one up!”
Lothlin
“If only this demo was available back in the 80's Oric would have become what it was deserving, the all times best-seller home-computer.”
SGT04B
“When I buy my Oric1 (in 1983 and still working!) in Italy there isn't Oric software in Rome's shop..Sigh! So, when I spent lot of time typing my machine code games/demo, I've dream things like this VIP4 DEMO run on my prefer microcomputer (I was 12 years old at the time) and NOW this kind of amazing Oric's capabilities ARE a reality!! This demo is AWESOME!”
Cristian